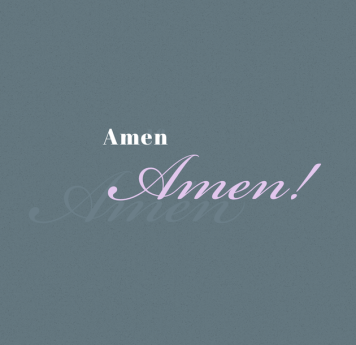 This week I  studyed the little word Amen; and I came across four great articles that you might want to print and study before the Lord’s Day. I promise you, after considering this you will never say this word lightly again.

Here is a taste of each one of these articles:

“The saying of the corporate amen is a great covenant privilege, and has the force of a binding oath. We never want to take it lightly, or invoke it to no purpose, or, worst of all, to mumble it.” Douglas Wilson

“I think he would say that God is calling us out of our cocoons of emotional isolation and invisible, inaudible, unshared responsiveness. I think he would say, it’s God’s will that we echo the excellence of God in preaching and prayer – that we express our affirmation of the truth of God in the Word, and that we resonate verbally with Godward longings and yearnings in prayer.” John Piper

“Worship in biblical terms is a corporate matter. The corporate body is made up of individuals, and when an individual sounds the “amen,” the individual is connecting to the corporate expression of worship and praise. However, we are told in the Scriptures that the truths of God are “yea” and “amen” (2 Cor. 1:20), which simply means that the Word of God is valid, it is certain, and it is binding. Therefore, the expression “amen” is not simply an acknowledgment of personal agreement with what has been stated; it is an expression of willingness to submit to the implications of that word, to indeed be bound by it, as if the Word of God would put ropes around us not to strangle or retard us but to hold us firmly in place.” R.C. Sproul

By His Grace, under His sun,

1 thought on “Let Your Amen be Heartfelt”