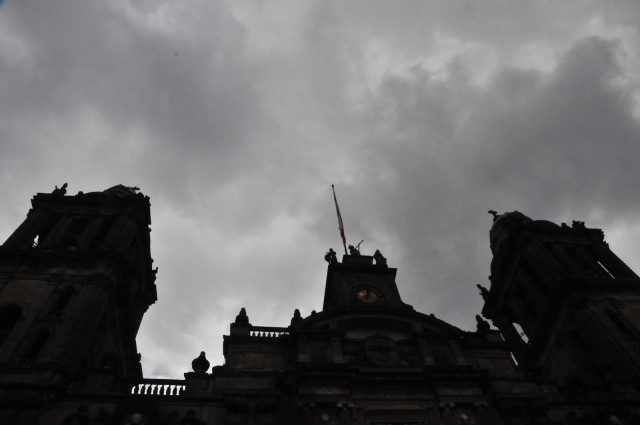 We have a friend visiting from another country, and if you know us, we love to have people over and show them the city we live in.

Today the tour was to visit downtown and the huge Cathedral in it.

As you walk inside the massive building with three different architectural styles (it took three centuries to build it) it is mostly dark, the smell is peculiar, and your eyes are immediately forced to look at the altars.

The altars (the Altar of Forgiveness and the Altar of the Kings, in the main nave)  are covered with gold, lots of gold. Many people are in there, tourists, children, workers; three nuns and a priest found their way through the people; some devouts were kneeling before the so many images found in the sixteen chapels, two men were in solitude contemplation were sitting on the benches. Others were giving alms, and a lady was pouring holy water on her wallet.

There are as many images of different saints as you can imagine; and as many  different “Virgin Mary” as you could think of, one for each need. There are all kind of “Christs”, there is even one called “The Black Christ”, and another one called “The Lord of Cacao Beans”.

What do we learn?

The heaviness over our spirit to see all this idolatry breaks our heart, but there has to be a lesson for us to learn.

What about the idols of the heart that we have and cannot be seen?

They are as terrible and as abominable before God as these wooden idols whom our eyes saw with such indignation.

Let us examine our hearts and search them lest we had already made ourselves some idols.

God mocks the idol makers and idol worshippers, making them just as the idols they build for themselves,

” All who fashion idols are nothing, and the things they delight in do not profit. Their witnesses neither see nor know, that they may be put to shame. Who fashions a god or casts an idol that is profitable for nothing?  Behold, all his companions shall be put to shame, and the craftsmen are only human. Let them all assemble, let them stand forth.

They shall be terrified; they shall be put to shame together. The ironsmith takes a cutting tool and works it over the coals. He fashions it with hammers and works it with his strong arm. He becomes hungry, and his strength fails; he drinks no water and is faint. The carpenter stretches a line; he marks it out with a pencil. He shapes it with planes and marks it with a compass. He shapes it into the figure of a man, with the beauty of a man, to dwell in a house.  He cuts down cedars, or he chooses a cypress tree or an oak and lets it grow strong among the trees of the forest. He plants a cedar and the rain nourishes it. Then it becomes fuel for a man. He takes a part of it and warms himself; he kindles a fire and bakes bread. Also he makes a god and worships it; he makes it an idol and falls down before it. Half of it he burns in the fire. Over the half he eats meat; he roasts it and is satisfied. Also he warms himself and says, “Aha, I am warm, I have seen the fire!” And the rest of it he makes into a god, his idol, and falls down to it and worships it. He prays to it and says, “Deliver me, for you are my god!”

They know not, nor do they discern, for he has shut their eyes, so that they cannot see, and their hearts, so that they cannot understand. No one considers, nor is there knowledge or discernment to say, “Half of it I burned in the fire; I also baked bread on its coals; I roasted meat and have eaten. And shall I make the rest of it an abomination? Shall I fall down before a block of wood?”  He feeds on ashes; a deluded heart has led him astray, and he cannot deliver himself or say, “Is there not a lie in my right hand?”

May God grant us a repentant heart.

My two three recommendations for today:
If you want to learn more about about how idolatry destroys our life, consider reading, We Become What We Worship, A Biblical Theology of Idolatry, by G.K Beale or Counterfeit Gods: The Empty Promises of Money, Sex and Power, and the Only Hope that Matters, by Timothy Keller
Again, Diane has a great article worth reading, Repent or Perish! John H. Gerstner.
Petra gives moms great encouragement, In the Arms of Faith

4 thoughts on “Reformed People in a Catholic Cathedral”