The story of Joseph is one of my favorites in the Bible mainly because Joseph is clearly a powerful type of Jesus.

In Genesis 50 we read that after Israel (Jacob) died, Joseph’s heart grieved for him and he, along with his brothers, mourned and cried, and buried his father Israel. But not long after that, Joseph’s brothers came to him with great fear.

The past still haunted them. Their past sin’s shadow had not yet departed from them. They had once asked Joseph to forgive them from their sin against him, and Joseph had expressed his forgiveness with words and tears, and actions (Gen. 45). Joseph even called them and brought them near to him, to a safer place where they would lack nothing. But now that their Father was gone, now that their circumstances had changed, the questions came back and the shadows grew darker and bigger as the memories of that day rushed back like cataracts -the Dreamer, the tunic, the well, the merchants, the look on Joseph’s eyes, his cries, his pleas, the blood of the animal, the lies all had to make up, the moment they faced their father, his loud cry, and the way their lives were changed forever- all were tangible memories that made them shiver and sweat.  What if Joseph had changed his mind? What if Joseph’s forgiveness was just a show to make their father happy? What if he had not really forgiven them? So they came and again asked for his forgiveness one more time because, you see, forgiveness and restoration and all-is-forgotten-and-all-is-made-new is too good to be true, and it just can’t be that easy, right? Their nightmares were real, but more real than Joseph’s promise of forgiveness?

However, Joseph didn’t change his mind. He “wept when they spoke to him” and said to them, “Do not fear… ” and then again, “Do not fear; I will provide for you and your little ones.” And the author tells us that with these words “he comforted them and spoke kindly to them.”

If we could only see and understand how Jesus forgives us! How many times we are haunted by our past sins, by memories that out of nowhere spring up and cast a heavy shadow on our hearts. How many times we have asked God to forgive us for the same sins over and over again? We are like Joseph’s brothers, we doubt the character, the goodness, the free gift that Jesus gives us. We can’t possibly believe that God forgives the worst and calls us and brings us close to him to feed us with the best of the land, with bread and wine. “No,” we say, “that can’t be.”

But we must believe and not fear to come when God bids us to come. God’s love for us and His forgiveness are not dependent on anything we do or don’t do; His forgiveness doesn’t rest on the circumstances around us, His forgiveness comes from His immutable character and perfect love. He even leads us, in his kindness, to repentance. We ask for forgiveness because He softens our hearts to be able to do that.

Don’t fear the shadows of past sins. Repent and believe that He delights to forgive His people.

And there is one more layer to unwrap in this story. One more lesson on forgiveness.

How do we extend forgiveness to others? Like Jesus to us? Like Joseph to his brothers? Joseph knew -and never denied- that what their brothers did to him, they did full of malice and meant it for evil. However, he fully forgave them and did all that was possible for him to do to restore that relationship. Why did he do that? How was that even possible? Again, because Joseph knew God and His character. He understood one thing above all else: God is sovereign over all the events of our lives, even over those things that people do and say against us. He even told his brothers, “Do not fear, for am I in the place of God?” (50:19)

Let us learn to be like Joseph -and even more like Jesus. Let us welcome those who have hurt us and have meant evil against us, let us start saying more often kind words that can bring comfort, “Do not fear, come…”

Soften our hearts, Oh Lord, to receive and extend forgiveness.

I love this quote from the book I am using to teach in our Ladies’ Book Club, and thought that maybe you will find it useful too.

“The exercise of Christian charity is an essential duty, yet it is not to override everything else- God has not exercised love at the expense of righteousness. The exercising of love does not mean that the Christian himself is to become a nonentity; a mere straw blown hither and tither by every current of wind he encounters. He is never to please his brethren at the expense of displeasing God. Love is not to oust liberty. The exercise of love does not require the Christian to yield principle, to wound his own conscience, or to become the slave of every fanatic he meets. Love does enjoin curbing of his own desires and seeking the good, the profit, the edification of his brethren; but it does not call for subscribing to their errors and depriving himself of the right of personal judgment. There is a balance to be preserved here: a happy medium between cultivating unselfishness and becoming the victim of the selfishness of others.”  A.W. Pink, The Prayers of the Apostle (p.26) (emphasis mine).

My Pastor says it well, “Grace has a backbone.”

I just finished reading -again- Douglas Wilson’s book, Standing on the Promises: A Handbook on Biblical Childrearing, and I have to say that this is the one book I most recommend on the subject. In one of the last chapters Douglas Wilson writes about parenting teenagers, and says that we need to pick our battles carefully and prayerfully.

Now, that is a phrase that struck me, because it is not only true when we are talking about childrearing. It is true about every battle we face. 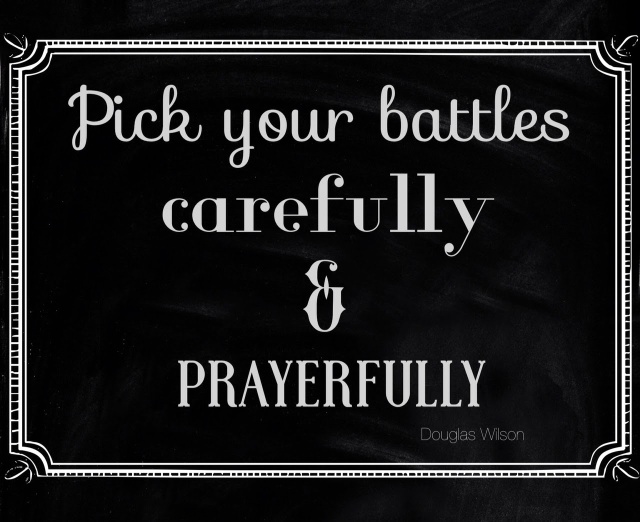 As Christians we face many opportunities every day to pick battles not only in our home, but with our brothers and sisters in Christ, our close friends, and our fellow believers in social media: these are battles that call us to stand for the Truth, to say the right thing, to do the right thing, to expose lies, to confront sin, to ask the hard questions, etc. But we must learn that the fact that there are many opportunities for us to pick a battle every hour doesn’t mean that we are responsible to fight every battle.

We must learn to carefully and prayerfully (that is the key word!) discern when when are we supposed to do or say something. We must resist the temptation to react before praying to see if we are indeed called to do something more than praying for that particular person or situation. have you considered why do we so easily forget -in a very practical way- that the effectual prayer of the righteous man availeth much (Jas. 5:16)?

Some other women may face the temptation of never picking up any kind of battles, they never leave their comfort zone, and are always afraid to stand for the Truth, they are never willing to do and say the right thing, to expose sin, to deal with it. This exhortation is also for them. We all need to learn to pick our battles carefully and prayerfully. We all need to learn to live this.

Picking up our battles carefully and prayerfully will help us grow into more mature Christian women who can rest knowing that the Lord is Sovereign and uses pastors, elders, deacons, parents, professors, husbands, etc. to keep His people from going astray and make the Church even more beautiful.

Such an encouraging post from John Piper and his son Abraham. Please, read here.

“The only ultimate reason to pray for them, welcome them, plead with them, eat with them, or take an interest in their interests is so that their eyes will be opened to Jesus Christ.
And not only is He the only point, but He’s the only hope. When they see the wonder of Jesus, satisfaction will be redefined. He Himself will replace the money, or the praise of man, or the high, or the sex that they are staking their eternities on right now. Only His grace can draw them from their perilous pursuits and bind them safely to Him—captive, but satisfied.

God will do this for many. Be faithful and don’t give up.”

May God renew your hope today as you continue to persevere in prayer,

“The giving of thanks can only begin when the gift of the divine Word is acknowledged; indeed, only when I am immersed in the study of the divine Word. How could one begin to give thanks to God and not concern oneself with his Word? What kind of thanks would it be to receive the gifts but refuse the required obedience to the giver? It would be a pagan thanksgiving, which is indeed widely practiced.
That is not a giving of thanks to the Lord God, but rather to an impersonal fate or fortune to which I am in no way obligated. Thanks to God that does not proceed from an obedient heart is presumption and falsehood. Only when God’s revealed Word has made our heart want to obey him can we thank God for earthly and heavenly gifts…

I thank God because I want to learn and know what he requires of me, but I thank him as one who is still only learning, who still lacks everything when measured by God’s righteous judgments. So thanksgiving leads me back to the giving God and then forward to the commanding God, in order finally to find in him his righteousness, which I experience anew as righteousness given to me. “Whoever offers me the sacrifice of thanksgiving honors me; but to those who keep in my way will I show the salvation of God” (Ps. 50:24).”

Bonhoeffer, Meditating on the Word (emphasis mine)

Today as I fix my heart on the Cross, and I am drawn to give Him thanks -over and over again- for His perfect sacrifice, for His atonement, I am also drawn to pray, “Lord, help me to show you my gratitude through my love and obedience to your Word.”

There are days when I just don’t know how to pray.
Days when the right words won’t seem to come.
When the right words in my mind,
doesn’t sound right in my mouth.
There are days when I just don’t know how to pray.
In days like that,
I found myself murmuring
Quietly,
Whispering,
Over and over again,
From the depths of my soul,
With all my strength,
With faith the size of a mustard seed,
Little, but enough to move mountains.
A short prayer,
A prayer that reaches Heaven
And changes Earth…
“Father, let thy will be done on earth
as it is in Heaven.”
And amen, and amen.
I can rest assured that my prayer will be answered.
That my voice has reached my Father’s heart,
That I shall not be anxious about anything,
Because His will will be done.
And His will for His children is good,
Always good,
And I whisper again
This time three words…
“Thank you, Lord.”
And amen, and amen.

My Most Recent Posts